Fantasy Islands: Environmental Justice in China and Beyond

City Talk: Eco-desire in China and Beyond

Dr Julie Sze’s research probes Chinese, European, and American eco-desire and eco-technological dreams, and examines the solutions they offer to environmental degradation in this age of global economic change.The rise of China and its status as a leading global factory are altering the way people live and consume. At the same time, the world appears wary of the real costs involved. Uncovering the stories of sites in China, including the plan for a new eco-city called Dongtan on the island of Chongming, mega-suburbs, and the Shanghai World Expo, Julie Sze explores the flows, fears, and fantasies of Pacific Rim politics that shaped them. She charts how climate change discussions align with US fears of China's ascendancy and the related demise of the American Century, and she considers the motives of financial and political capital for eco-city and ecological development supported by elite power structures in the UK and China. Fantasy Islands shows how ineffectual these efforts are while challenging us to see what a true eco-city would be. 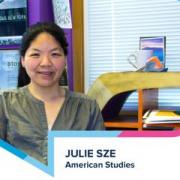 Professor Sze has received a number of grants for her individual research, from the UC Humanities Institute, the American Studies Association, and the AAUW. As Founding Director of the Environmental Justice Institute, she received two large grants to support the project from the Ford Foundation and smaller grants related to specific research projects. Outputs from the research from this period have had public policy impact in the State of California.

Professor Sze has been an invited keynote at international conferences and events in Germany, China, Italy, Abu Dhabi, France and Canada. She spoken at over 65 universities and colleges in the U.S. ranging from the Ivy League institutions, community colleges, Public universities, and liberal arts colleges. Sze has been interviewed widely in print and on the radio.

She is deeply committed to public scholarship, speaking at institutions like the SF MOMA, New York Academy of Medicine and the Asia Society, state agencies, service organizations and community groups interested in her areas of research throughout New York and California. She is also an active mentor for first generation and low-income students in graduate education, with a fifteen-year active involvement with the UC President’s Postdoctoral Fellowship Program. [Source:ucdavis.edu]