Community Art and the City: A European View

Some say that community art is the grandmother of all art. The Scottish anthropologist Victor Turner, for one, suggested that human beings, through art that they themselves create, interpret past and present life and try out new ways of being for the future. It is one compelling reason why everyone should have access to the arts, so that they people can create their own images and tell their own stories, rather than having them represented – inevitably imperfectly - by others (autonomous artists, journalists, populist politicians). Once you know someone’s story it is much harder to hurt them, claims Scott Rankin from Big hART in Australia, one of the world’s most ambitious community arts organizations. His company made a huge impact at the recent International Community Arts Festival in Rotterdam, which I directed. That festival attracted many key players from around Europe. Today in our continent, community arts, with roots in the 1960s, is now beginning to spread from its traditionally strong and predominantly urban base in the U.K. and the low lands into new territories in the former east bloc and the south.

Amply illustrated with audiovisual material, this talk will first explore some of the origins and principles of community art as it has developed around the world, before focusing on its current practices and dilemmas in the Netherlands and elsewhere in Europe. What is the elusive power of community art? Are we perhaps frontloading the practice with too many unrealistic social and political expectations at the expense of art? Given the diversity of practices and emphases within the community arts continuum even within one single country, let alone when considered across national boundaries, these questions are not easy to answer. Even between The Netherlands and Flanders substantial differences exist when it comes to community arts. The dialogue across language barriers within Belgium, even among like-minded community arts practitioners, is pretty much mute. Yet, given its fundamental commitment to establishing sustainable, equitable relationships between artists and non-artists, community arts may still be better suited than any other art form for fostering fruitful dialogues across social, cultural, and national boundaries. It uncovers local stories and knowledge on people’s own terms, it provides opportunities for marginalized groups to perform beyond stigmas that others place upon them, it injects creativity and a vibrant cultural life in under-resourced parts of the city and rural areas, it counteracts prejudice and xenophobia, and, in the best of cases, enriches a nation’s cultural canon with innovative art from the bottom up. How it does all this – through theatre, visual arts, dance, and music - I hope to demonstrate with a few fascinating examples from the Netherlands, Northern Ireland, England, Poland, and the Czech Republic. 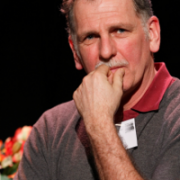 Eugène van Erven (1955) is a scholar and community arts producer from The Netherlands. He is artistic director of the International Community Arts Festival in Rotterdam and community arts curator for the Treaty of Utrecht cultural program in 2013. He is also Associate Professor of Theatre Studies at Utrecht University and the author of a number of standard works on art and social engagement, including Radical People’s Theatre (Indiana University Press 1988), The Playful Revolution: Theatre and Liberation in Asia (Indiana 1992) and the book and video package Community Theatre: Global Perspectives (Routledge 2001). He serves on the editorial board and is an active peer reviewer for RiDE: the Journal of Applied Theatre and Performance (Routledge).